DAKAR, Senegal (AP) — Alhaji, a 21-year-old gay man, knew there was trouble when he heard that an uninvited guest was snapping photos in the middle of his poolside birthday party in Gambia’s capital.

That photographer turned out to be a member of Gambia’s feared National Intelligence Agency, and accused Alhaji of throwing “a gay party” in violation of Gambian law.

He and 17 other men were taken into custody that night. In the months that followed, he said they were interrogated, beaten and subjected to a very public trial that destroyed their reputations in a country where President Yahya Jammeh has called for sexual minorities to be decapitated.

As they were escorted from the courtroom after their acquittal, Alhaji heard someone yell: “You think you’re free, but you’re not. This is just the beginning. When the law can’t do anything, we can do something.”

Alhaji, a slight, soft-spoken clothing vendor who insisted that his full name be withheld out of fear for his safety, fled to neighboring Senegal where he hoped to obtain refugee status and then resettle in a third country. More than a year later, though, the Senegalese government has made no progress on his application, leaving him and a dozen other gay Gambian men stranded in a country where homosexuality is also illegal — and punishable by up to five years in prison.

Rights workers advocating on behalf of the would-be refugees are calling for their cases to be expedited. At the same time, Djibril Balde, the Dakar-based representative of the International Refugee Rights Initiative, said there was little hope for a positive outcome. 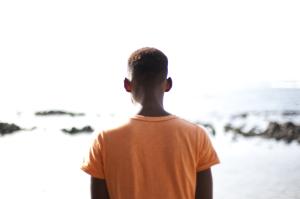 “I am fundamentally certain that these cases will be rejected,” he said. “People are fundamentally hostile toward gay-related issues. That’s definitely clear.”

Senegal’s asylum office, the National Commission of Eligibility in Dakar, declined to comment. The total number of applications for refugee status makes it impossible to ensure a speedy process, said an official at the commission who insisted on anonymity because he was not authorized to discuss its work.

The commission has a backlog of more than 2,000 refugee status applications filed on all sorts of grounds, meaning it is not just homosexuals who are stuck in limbo, said Mathijs Le Rutte, regional representative for protection at the United Nations refugee agency. But while most refugee candidates from other countries have removed themselves from immediate danger simply by reaching Senegal, the same cannot be said for homosexuals.

Lesbian, gay, bisexual and transgender, or LGBT, asylum seekers are considered to be among the most vulnerable in Africa because of the high likelihood they will face discrimination in the countries where they seek protection. In countries like Senegal, Kenya and South Africa that receive a high number of gay men and lesbians hoping to obtain refugee status, reports of ill-treatment by the local population and indifference from government officials are common.

Abductions, mob attacks and rapes targeting gay asylum seekers have been documented in Kenya and Uganda — incidents the victims had difficulty reporting to police because of their ambiguous legal status, according to a May 2012 report by Human Rights First.

“LGBT refugees face many of the same challenges that other refugees do, but in addition they also face a range of other challenges,” said Eleanor Acer, director of refugee protection for Human Rights First. “In some cases they’re doubly marginalized.”

Of the 38 African countries that criminalize homosexuality, Senegal and Gambia are among the strictest enforcers. Since 2008, Senegal has been gripped by what Human Rights Watch describes as an anti-gay “moral panic,” with arrests and mob justice on the rise. In some towns, the corpses of men presumed to have been gay during their lives have been dug from their graves and dragged through the streets.

In Gambia, Jammeh has made clear that gays are unwelcome, saying repeatedly that any who are found in the country would “regret” being born.

For two weeks after the raid on his birthday party, Alhaji says he was kept in solitary confinement in Banjul. Guards woke him up each morning by dousing him in cold water, then beat him during interrogation sessions so he would divulge the names of other gay men and lesbians.

Police then searched Alhaji’s home for items that would confirm he was gay. He said all they turned up were some boxer-briefs, which they deemed “feminine.” 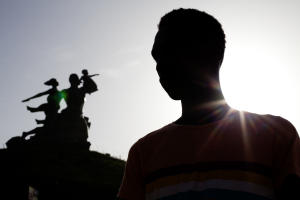 After about a month, Alhaji was allowed to post bail of about $2,000, but his trouble did not stop there. Gambian media reported aggressively on the case and published photos of the suspects taken as they tried to shield their faces from the camera. Public opinion turned against them long before their acquittal in August 2012.

Alhaji’s account of his treatment and trial has been confirmed by human rights activists and reports in the Gambian press.

Once Alhaji arrived in Dakar, he bounced around various apartments in the capital before ending up in Mbour, a coastal fishing village popular with tourists. He lives with a female sex worker who sometimes gives him money, but he says sometimes he goes for two days without food. Because Alhaji has not been granted refugee status, he has no claim to basic food and health services available to other refugees in Senegal.

Five other Gambians who were at Alhaji’s party fled to Senegal, he said. Earlier this month, one of those also seeking refugee status in Senegal succumbed to an undiagnosed illness after he couldn’t afford medical care.

“He was in the same problem, the same situation, so I had to take him as my own brother,” Alhaji says. “Now I feel like I’m the only one who lives here.”

He said returning to Gambia is not an option, a point driven home by a recent speech by President Jammeh who equated seeking asylum with treason.

“Tarnishing the image of this country is treasonable and all those engaged in this would pay a high price,” Jammeh said in the Oct. 14 speech broadcast on state television. “Hating one’s country is ungodly.”